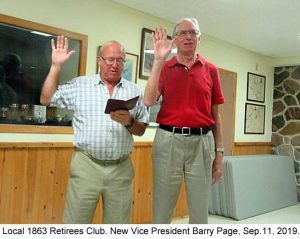 On, September 11, 2019, brother Barry Page was installed as the new Vice President for Local Lodge 1863 Retirees Club, Goderich, Ontario, Canada. Barry took over the position from brother John White, who stepped down for health reasons. John has been both Vice President and President since the club’s formation and still remains active. John was recognized for his significant contributions to the club by current President, brother John Stadelmann.

Attached is an image of brother Barry Page (right) and brother John Stadelmann during the swearing-in procedure.

This entry was posted in Retirees, Website. Bookmark the permalink.